A free 30-day trial of our tool to compare text in Microsoft Word and Excel 2013 is available from the Microsoft Store.

N.B. When comparing multiple Excel rows, as shown in the video, it is better to compare at the level of words than characters. It is primarily a text diff tool. DiffEngineX is our full featured Microsoft Excel compare software.

Our app Selection Diff Tool requires Microsoft Office 365 or Office 2013 to be installed. It is great to quickly diff text selections and to compare lists in Excel and Word. Selection Diff Tool isn't as full featured as DiffEngineX for comparing Excel spreadsheets, but is nonetheless very useful.

Selection Diff Tool can be purchased at the Microsoft Store.

We have written the vast majority of our software (DiffEngineX, Selection Diff Tool for Office 2013/365 and the diff text algorithm used on www.diff-text.com) on Dell Dimension desktops and Inspiron laptops. As such we looked at Dell for our next generation of computers.

Earlier this year we purchased a Dell Precision M3800 15.6 inch laptop along with a USB docking station and an external DVD/CD reader/writer. The Precision line is thought of as being superior to other Dell models such as the Inspiron and Latitude. The M3800 has an aluminum top and a carbon fiber base. Unlike previous Precision models, the M3800 is thin and probably meant to compete with the MacBooks. At the time of our purchase, it was the only Precision model to come bundled, by default, with Microsoft Windows 8.1 rather than Windows 8. Its built-in display is a touchscreen with a QHD+ resolution of 3200 x 1880. It has 16Gb of RAM memory.

We were attracted to the Precision line as they have twin fans and dual drives. Our model came with a 256Gb solid state drive full mini card and a 512Gb 5400 rpm hard drive. A solid state drive (SSD) is the best way to speed up a computer. The responsiveness of the Precision compared to our earlier Dells is amazing. Our previous Dell Inspiron suffered from overheating when we left it working continually one day and so twin fans was a plus point for us. Just a few weeks after our purchase, Dell released a higher-spec Precision model with a 512Gb SSD.

The text rendering and display is superb, partly due to Windows 8. Its built-in monitor is excellent. Applications start up immediately. The secondary 5400 rpm hard drive is fast as well, probably due to it being a hybrid drive with in-built memory caching.

One thing to watch out for is that it has a Noble Security Slot, which I found was not compatible with Kensington laptop locks.

Overall we think it is a good purchase. The machine is fast, light and thin.

Occasionally the display will blank out for a second, especially when right-clicking on the desktop.

For the specifications on offer, Dell is slightly more expensive than other manufacturers, but we did specifically want a laptop with twin fans and space for two drives. If you order through one of Dell's representatives it is sometimes possible to ask for a deal and get more than you would otherwise.

From our experience so far, we think this is a good purchase. The laptop has an excellent display, is fast, elegant and light. It is perfectly quiet in normal operation. Having a laptop with twin fans and both a SSD and a higher capacity magnetic hard drive were plus points for us.

Dell do not produce Windows 8 and so any criticisms of it do not reflect on them. We have found that Microsoft Virtual PC (important for running legacy operating systems as a guest on your current one and hence testing) does not run on Windows 8, although it does run on Windows 7, Vista and Windows XP. There are alternatives, although, as software developers, we did find this annoying.

This is going outside the scope of the review, but Visual Studio 2012 and 2013 no longer include a Microsoft setup project, as they did in Visual Studio 2010. You can download the InstallShield Limited Edition for free, which pretty much covers most things the Microsoft setup project did. We managed to convert over our setup project in one morning. We were disappointed that the size of our installer increased from 44.4 Mb to 59.2 Mb, when Microsoft dot net 4 installation files are included. Some of the less vital parts of our setup project could not be converted over. We don't know whether this is because the InstallShield Limited Edition doesn't have the functionality or that we didn't look hard enough to find it.

If the transition to Windows 8 had been a little smoother, we would not feel the need to go back to Windows 7 occasionally.

Before our purchase of the Dell Precision, we did install Windows 8 on a Sony Vaio laptop we purchased in 2008. We were quite amazed at the speed up in boot up times as compared to Windows 7.

Most commentators on Windows 8 concentrate on the loss of the Start Button and its hierarchical list of applications. This ignores the performance boost of Windows 8 as clearly seen when we installed Windows 8 on old our Sony Vaio. It is quite possible to partially replace the lost functionality by moving application shortcuts to the taskbar. Right-clicking an application shortcut on the taskbar reveals the list of recent documents opened by it.

Next Major Version 3 Of DiffEngineX Released

Version 3 of DiffEngineX (the compare Excel xlsx workbooks software utility) has been released and is available for download.

This is a paid upgrade. If you have purchased within the past two years, you are eligible for a discounted upgrade price. Click here to purchase an upgrade license.

If you have purchased over two years ago or are upgrading from version 1, click here to purchase at the regular upgrade price.

By paying for an upgrade you are helping us produce the next generation of our software products.

Version 2.29 of DiffEngineX was released today. It has better error handling when the two Microsoft Excel spreadsheets being compared contain cells with problematic text containing invalid characters. The problem this release fixes only occurred when Microsoft Excel 2007 (rather than Excel 2003, 2010 or 2013) was installed.

We have recently released a new style Office app for Excel 2013 and Word 2013. It will not work with Office 2010 or earlier.

In Word 2013, it reports the plain text differences between two different document selections.

Although it runs inside Office, it can act as a simple clipboard diff tool.

Please note it uses new Microsoft technology and only works in the desktop versions Excel 2013 and Word 2013. Potentially it could be rather useful in Word Web App when Microsoft update it to support Office apps.

It can be found in the Microsoft Store.

Of course if you want a full featured Excel diff tool that compares all the formulae, values, comments, names and VBA macros for practically all versions of Excel, there is always DiffEngineX. 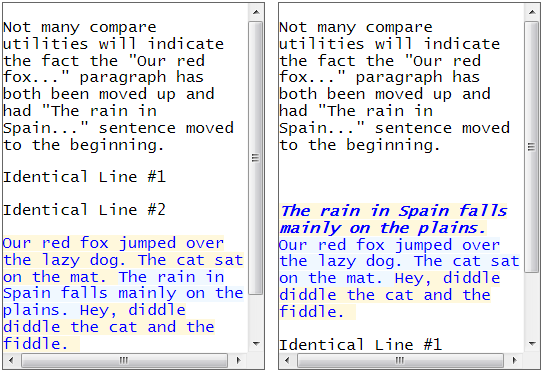 In the screenshot above we can see that the text of the paragraph has been colored blue as it has been moved up in the document. Additionally the sentences have been reordered. Indicating this, the background color has been changed to alternately light blue and yellow. Not many compare utilities are capable of this. At some point we may release this as a stand-alone utility running outside of Microsoft Office.